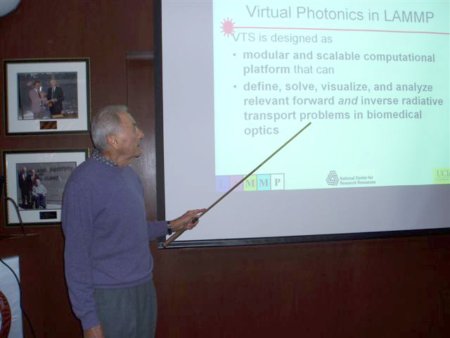 Dr. Jerry Spanier, Claremont University Emeritus Professor of Mathematics, and Beckman Laser Institute Research Faculty, has developed a short course on Monte Carlo methods, 'Monte Carlo Methods and Virtual Photonics'. The course was given in six 90 minute classes in 2007. The course materials are available below. The primary audience consisted of students, postdocs, researchers, faculty and visiting scientists at the Beckman Laser Institute, Department of Biomedical Engineering, and the Center for Complex Biological Systems (CCBS). The lectures were open to all who were interested in learning about this versatile and robust model for describing many physical systems. Topics treated were the equations of radiative transport, the simulation process, the connections between the physical and the computational models, the simulation process, and diffusion and higher order transport approximations.

Emphasis was placed on ideas most important for intelligent use of Monte Carlo codes, and both conventional and more advanced Monte Carlo techniques were treated. This informal series was meant to help integrate and expand the use of efficient computational methods across the LAMMP core technologies and to spur the development of written and audio-visual content for the future LAMMP Workshops on the Virtual Tissue System (VTS) and its software byproducts the Application Toolkits (ATKs). These Lectures inspired the Workshops which led to the annual Short Courses in Computational Biophotonics (SCCB) made possible through support from the NIH (R25-GM103818).

Our site uses browser cookies to personalize your experience. Regarding this issue, please find our information on data control and processing here and our information on server logging and usage of so-called 'cookies' here. By clicking here You confirm your approval of the data processing activities mentioned in these documents. Please note that You may only use this website efficiently if you agree to these conditions.